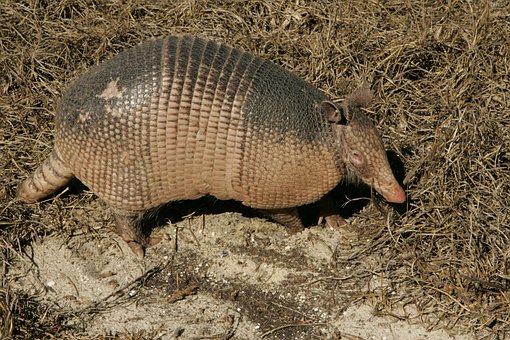 On a recent trip to Florida, my family decided to go out and walk around. We were enjoying the walk, since the resort was by a lake and you could see the fireworks from three parks, the evening couldn’t have been going any better.
Then we see something in the dark, moving about. To little for a gator, maybe a raccoon. So we went to investigate. We slowly crept closer and closer, till we recognized it to be an armadillo. She was peacefully wondering through the darkness, beside the lake, enjoying her evening walk too. Still no fear or concern from our forest friend. The father of my kids called them over with him, to see the little lady in her natural habitat. The obedient offspring did as they were told and joined the stalking. They followed her to what appeared to be a burrow in the nook of a Cypress Tree. She became agitated and did not enter. Instead she turned and took notice of Squirrel Removal but wasn’t intimidated and to examine us. Crazy people do things which aren’t in their character when on holiday in Florida, so my husband decided to show the children how armadillo’s are like rolly polly bugs, assuring us it would roll up in a ball when antagonized. He picked up a stick and struck the brush. She ignored him. He threw a rock in her direction, she shrugged him off. To prove his point to his children, he ran in the armadillo, expecting her to roll up and be still.
That armadillo ran at my husband so fast, he lost his flip flops hoping to get away. Having a pregnant wife and four children on his heels, we ran as far as we were able and stopped. Well, here came the armadillo, after my husband, not us, hissing and spitting and making unnatural noises I have never heard the likes of since.
When we finally made our way back to our condo (we forgo the elevator, no time if the armadillo was on our route), my husband made the profound observation,”Armadillo’s are less passive animals as I was told”.